Restoration Hardware’s launch of RH Modern is likely to have significant impact in a market ripe for disruption.

“What’s modern now?” Elle Decor asks in its latest issue. It’s a question we think a lot more of the market is going to be thinking about this fall, as Restoration Hardware rolls out its own bold answer.

Some critics have already called peak-modern. When the West Elm website sports no fewer than 169 “Mid Century” choices, it’s time to move on, they say. “I’m so over it,” Conde Nast lifestyle editor Sarah Engler sighs. “All those reproductions…It’s like everyone I know has the same coffee table.”

Or maybe the real show hasn’t even started.

That’s the bold bet by Restoration Hardware Chairman and CEO Gary Friedman, as the company embarks on a major expansion of selling space and product range this fall. Its modern range will mark a huge departure from the traditional styles that have fueled five straight years of 25% average annual growth. The first “RH Modern” collection debuts in September, with a 300-page catalog and dedicated selling space in key markets across the U.S. “The idea of scaling taste is large and far-reaching,” he declares in a video announcement, invoking the spirit (and business achievements) of Apple founder Steve Jobs. Restoration Hardware can be a “disruptive force in a highly fragmented modern market.”

We look forward to seeing the whole offer, and especially its presentation in one of the company’s capacious new “galleries” in major cities (such as the imposing Atlanta gallery, pictured above). Meanwhile, we’re intrigued by the “megatrends” the company identifies in support of its ambitions:

We’ll leave the speculation about baby boomer self-esteem to others, but we definitely agree that consumers are ready for easier, direct access to great modern design. And it’s clear that Restoration Hardware is going to have a lot to say about what’s modern now. 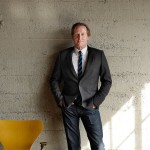